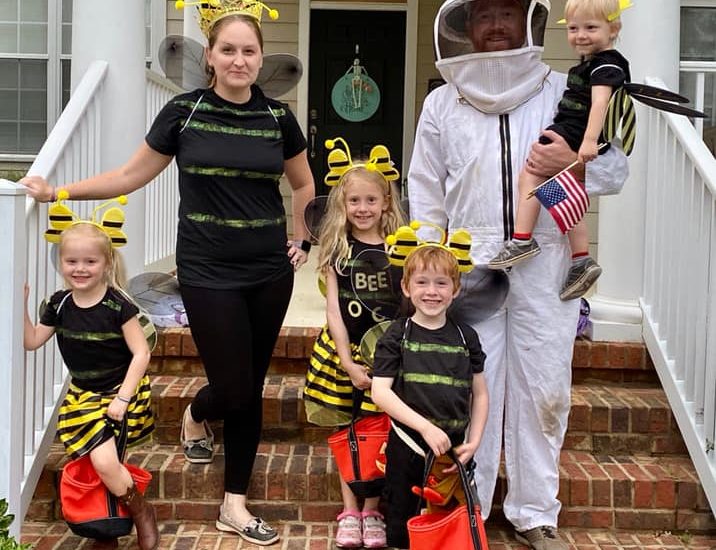 Ryan McKibben got into beekeeping by working with his wife’s grandfather, traveling twice a year to Alabama to help him with his honey harvest. Ryan expressed interest in beekeeping, and he got Ryan started with two hives.

Initially setting out just for the honey, the entire venture has been much more rewarding. “I found that beekeeping is a form of therapy for me,” shares the first generation farmer.  “Beekeeping forces me to relax or pay the price of a sting.”

From beekeeping Ryan has learned patience, which contrasts the high-paced military lifestyle he has applied to his professional career and his role as a husband and father of five.

“I served in Iraq for two tours, lost two very good friends, survived a couple of close calls, and came home broken without a sense of purpose.”  He made the decision to leave active duty immediately as his contract was up and became a civilian less than three months after returning from his last deployment with no reintegration training, no job lined up, and no prospects.

Ryan struggled – and continues to struggle somewhat – for years until he started vegetable gardening, which led to his interest in pollinators. From that experience, Ryan set a goal to know where 100% of his food comes from.

He started an agricultural fellowship and learned that providing nutrient-rich food for himself, his family, and consumers was the purpose he was lacking.

McKibben Farms operates 3 apiaries and a 7-acre farm – an acre of which will be used this year to grow watermelons and carrots. “I find that our children are benefiting from living a life that not only rewards you with food and income, but an attachment to where that food and income comes from,” says the Army veteran.

Those few short days were life-changing. Not only was he able to learn a great deal about beekeeping, but the benefits of beekeeping for his mental health.  Part of the Warrior Ethos is never accepting defeat and to never quit. No matter what comes this year, Ryan will not give up on his passion for agriculture and will not quit improving his position.

Progress has come in the form of fantastic news this month: “I have been blessed by receiving a grant from FVC and have grown from two hives to over a dozen and still growing,” beams Ryan.

“This hobby that turned into a business and that produces such a delicious crop has also yielded a better relationship with my family, a sense of accomplishment, and a purpose to push myself in a positive way to do something worthwhile.”