An historic announcement from the Deputy Secretary of Agriculture, a ground-breaking discussion between five departments of the Federal Government (pictured above) and a palpable enthusiasm among the 200 people in attendance marked the first National Farmer Veteran Stakeholders Conference, held in Des Moines, Iowa last weekend.

“In my sixty-two years, it was the most powerful congregation I have been part of,” said James Brady, Air Force veteran and Board member of Louisiana Association of Cooperatives. The sentiment was echoed by many as speakers gave first-hand accounts of the healing, sense of purpose and career opportunities that returning veterans were finding on America’s farms. 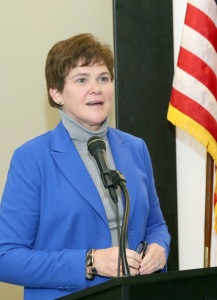 “Many of America’s veterans come from our rural communities, and are often drawn back to the land upon returning to civilian life,” said Deputy Secretary Harden (picture above). “Veterans are key to building our future generation of farmers, land stewards and conservationists. USDA already has a number of initiatives to help veterans find meaningful work in agriculture upon returning home, but this new position will help coordinate our efforts and make programs easier to navigate. I look forward to Karis’ leadership as we continue to support America’s heroes.”

Gutter, a native of Terry, Mississippi (pop. 1,099), began his career in public service as an enlisted United States Marine Corp Reservist. Gutter served as a Corporal in the Marine Corps and a communications and field radio operator, participating in humanitarian relief in support of September 11 and Hurricane Katrina.

“Serving as USDA’s first Military Veterans Agricultural Liaison is a great honor,” said Gutter. “As a Marine, I know military veterans have unique skills, training and perspective. My job is to make sure military veterans have full access to USDA’s resources and services to help them succeed in civilian life.” The USDA Military Veterans Agricultural Liaison, which reports directly to the Office of the Secretary, is a new position created by the 2014 Farm Bill.

Joining Gutter at the Plenary the next day were representatives of four other Departments of the Federal Government. Keith Kelly, Assistant to the Secretary of Labor, oversees Veterans Employment and Training Services (VETS). “Our main goal is to get veterans jobs,” said Kelly, a Vietnam veteran and past Secretary of Agriculture in two states: Montana and Arizona. “We don’t have a specific program for farmers and ranchers,” he said, but noted that the conference, bringing everyone together for the first time, could change that.

Jaime Wood, Army veteran and Director for Policy and Engagement for the Office of Veterans Business Development (OVBD) at the Small Business Administration (SBA) agreed. “Veterans are 45% more likely to be self-employed than the general population. The resources from the SBA can help veterans succeed in self-employment.” She, too, looked forward to what the new collaborations could bring.

Scott Silvay, Employment Coordinator at the Iowa VA and a disabled Army veteran, described how his local office connects veterans with education, job training, and apprenticeship programs. Silvay was asked why the VA did not send anyone out from Washington. “The VA is not adept and geared toward farming from a self-owned perspective,” Silvay admitted, “This is why we need the USDA liaison role to ensure that veterans’ needs are being met across all departments.”

Dr. Richard “Rick” Mestas led the panel. Dr. Mestas serves as Program Manager at the National Intelligence University, but spoke only in the capacity of his long-time role as Advisor to the Board of Directors of FVC. Mestas, whose career has spanned both military (Army) and education, pushed the panelists for ways they could cooperate across their departments to support rural veterans and a new generation of farmers, both issues critical to our national security.

Other keynote speakers included General Charlie Kruse, past President of the Missouri Farm Bureau and Past Secretary of Agriculture of Missouri; Brigadier General Stanley Flemming, DO, Ambassador to the US Army Reserves and current Councilmember, Pierce County, WA; and Ben Shaffar, Director of Business Development, Kentucky Department of Agriculture, and the developer of the Homegrown by Heroes label. The generals both sit on FVC’s Board of Directors

A panel of successful farmer veterans all touted their military experience as key to their ability to handle the rigor of a farming career. “In the military you are used to dealing with large, impossible situations where you need to think quick and be decisive, all great things that you need in farming” said Army veteran and fifth generation Minnesota farmer, Paul Zimmerman.

Paul Kanning, who took over family land in remote Montana after 20 years in the Air Force, liked the frequent moving he did in the military and was worried about the isolation of his farm. “It helps to connect with other farmers, particularly veterans,” Paul noted. Calvin Riggleman (USMC) charmed the crowd with stories of growing up on a farm in West Virginia dating back to before the Revolution. “I had never even been on a plane until they flew me to the Middle East,” said Riggleman, who explained how it was other soldiers from the cities who first told him about farmers markets and Community Supported Agriculture.

Mickey Clayton (Army), talked about how she overcame obstacles of combat injury, being a first generation farmer, and being a woman to become one of the nation’s leading ranchers of Navajo-Churro sheep. Chris Holman, spoke of his transition from military linguistics to teaching to agriculture as he began making money with pasture-raised poultry, eggs and vegetables in Wisconsin.

Both Mickey and Chris credited help they received from the Farmer Veteran Coalition in allowing them to grow their farms. “FVC helped me get a tractor,” Chris said. “It was like they gave me power.”

Mickey described how her herd went from a dozen scraggly sheep she found on Craigslist to the herd of 150 it is today, thanks to funding from her Bob Woodruff Farming Fellowship. The Fellowship allowed her to get a specially designed sheep squeeze so she could handle the large sheep despite the injury to her leg. “This goes beyond helping one wounded veteran to helping a growing community of women veteran farmers and a national community of shepherds raising this endangered breed,” she said.

Before the conference ended, many attendees began asking where there would be a conference next year. 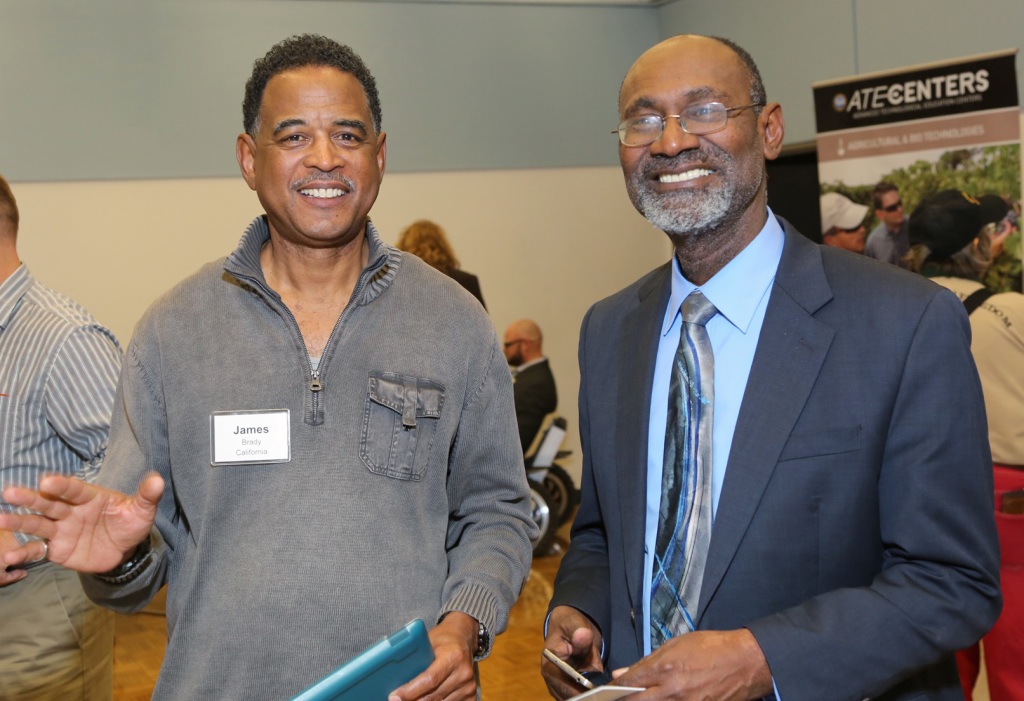 (L-R) James Brady, Board Member of Louisiana Association of Cooperatives, and Dr. Walter A. Hill, Provost at Tuskegee University. “In my 62 years, it was the most powerful congregation I have been part of,” said Mr. Brady of the Conference.

~Written by the staff of the Farmer Veteran Coalition

4 thoughts on “History Made at First Farmer Veteran Stakeholders Conference”