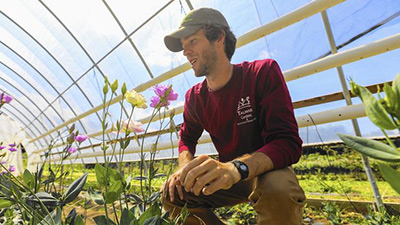 The days at Talmar Gardens start early. At 6:00 a.m., crews troop to the horticultural therapy center in Baltimore County to water, stake and trellis by hand, growing bushels of vegetables and some 5,000 flowers a week for sale to restaurants, supermarkets, florists and others. It’s a regimen that founder Catherine Murphy, a former special education teacher, has seen supply physical and mental benefits to hundreds of people with disabilities and special needs, not to mention the center’s many volunteers, since she started Therapeutic Alternatives of Maryland — Talmar — in 1998. Now she plans to expand the offerings, starting with a job training program for military veterans.

“I just know how great this makes other people feel that have some issues,” Murphy said. “I can’t think of a better thing to happen than to get guys to dig in the land, to feel the earth, to be in a safe environment and then be able to get a job.” Murphy is joining a growing number of organizations around the country that are designed to connect soldiers to agriculture. Farming, with its rigorous schedule, physical activity and sense of purpose, is a good fit for many former military personnel, proponents say.

“We’re finding that there’s a lot of interest in coming out of the service and finding something meaningful, and veterans are finding this kind of work meaningful,” said Michael O’Gorman, who founded the California-based Farmer Veteran Coalition in 2007. The group now counts about 5,000 members, including 71 in Maryland. O’Gorman estimated that there are now more than 250 groups that provide agricultural training pitched to veterans, with names like “Growing Warriors” and “Armed to Farm.”

Efforts to support serviceman farmers also have become increasingly formal, with grant programs, a “Homegrown by Heroes” label people can use to brand their goods, and other perks.

“For a long time, the VA and a lot of the veteran support groups just never saw agriculture as a viable option and I think that’s one of the things we’re really turning around,” O’Gorman said. 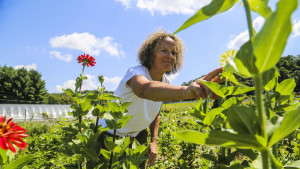 he movement reflects a confluence of forces — a vogue for farming thanks to the growing buy-and-eat-local trend; a need to recruit younger people to the business; a bumper crop of veterans returning from wars in Iraq and Afghanistan; and a partly recession-rooted focus on job training and placement. Recognition of the role for alternative therapy programs in treating problems such as post traumatic stress syndrome has increased too, said Aaron Jacoby, chief psychologist for the VA Maryland Health Care System, which offers horticulture therapy at its Perry Point facility. The U.S. Department of Veterans Affairs estimates that PTSD afflicts between 10 percent and 20 percent of veterans of the wars in Afghanistan and Iraq. Gardening can provide veterans with mental satisfaction through the care of a growing thing in a tranquil setting, while also performing soothing physical activity — though it doesn’t replace traditional treatment, Jacoby said.

Marine Corps veteran Jeremy Lopez, who runs the Celestial Roots Farm in Anne Arundel County with his fiancee, Sarah Campbell, has experienced the benefits of farming firsthand. Lopez, 34, grew up in California in a military family and joined the Marine Corps out of high school. When he left in 2004 after five years, he found himself bouncing from one college program to another, struggling with the transition to civilian life. Eventually, he made his way to a small farm in California and started to feel back in a groove.

“There’s a couple of fundamental things that are very similar between the military experience and the farming experience and I think one of them is just the sense of service,” 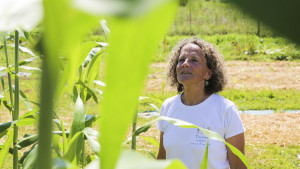 said Lopez, who connected with the Farmer Veteran Coalition and returned to school, where he met Campbell, who suggested he run her family’s farm in West River. The couple took over the 500-acre farm last year and sell pastured meat — mostly pigs for now — as well as mixed vegetables. They also are expanding operations into the family’s nearby alpaca farm. Lopez said he did not know about Talmar’s plans, but combining agricultural job training with mentoring and other mental support is important. “Let’s make sure that there’s the help readily available … instead of the veteran having to have something traumatic happen in their life in order to get the help,” he said.

Murphy said she hopes to start a program at Talmar’s Cromwell Bridge Road farm in March with about 16 veterans engaged in an eight-month course, with workshops, classes and other training. The veterans — and their families — also would have access to a “camaraderie garden” as well as counseling and therapy at the center. The hope is that people would graduate with the skills to start their own businesses.

Program developer William Rhodes, 61, said he believes it will be a good fit for the area. “It’s good for Baltimore because it’s got vacant lots. At the same time, we can serve food deserts,” said Rhodes, a longtime Harford County farmer who did a 15-month stint as an agricultural adviser in Afghanistan’s Bamyan Province starting in 2009. 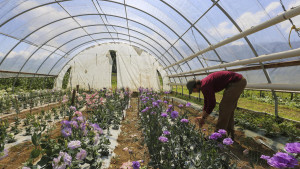 lmar currently serves about 130 people with disabilities and special needs and has more than 200 volunteers, leasing land from the Baltimore County Department of Recreation and Parks. Of the 10 acres, they use about 3.5 acres right now, so there’s room to expand, first with veterans, then possibly into other areas. Staff are applying for grants and working to get listed as a school eligible for GI Bill funding. They also are reaching out to groups that work with veterans, seeking future referrals to the program.

“This is just an extension of what we’re doing now,” Murphy said. “We have the land and we have the staff and the people and it’s a perfect opportunity.” As she walked between rows of wonderberries growing in the hot sun during a festival Saturday to help raise funds for Talmar and the veteran program, Murphy said: “It’s the plant-human connection. That’s what it’s all about.”