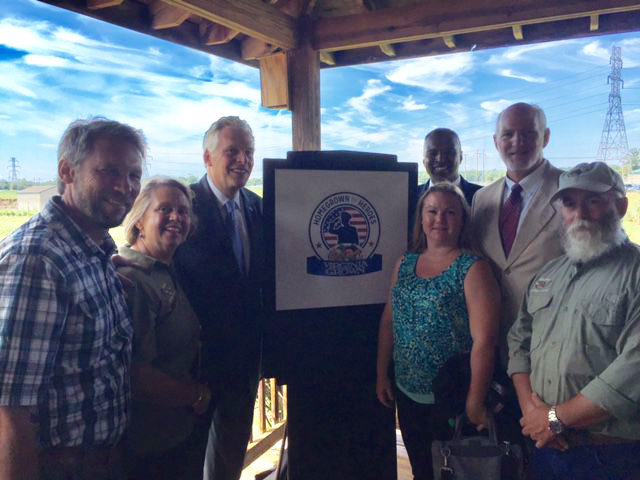 James McCormick is a man of many titles. He’s a decorated Army veteran, a minister, a father of eight—including two serving their country in the armed forces—and owner of Raising Cane Farms in rural West Virginia.

James is also director of his state’s Veterans and Warriors to Agriculture program, the first state-backed program of its type in the country. And now he has a new title: president of Farmer Veteran Coalition of West Virginia—one of six new state chapters that are launching this year.

James and the West Virginia chapter join New York and Virginia as the latest states to launch chapters, while Indiana, Texas and Washington will launch chapters later this year. In addition to the state chapters formed in Virginia and West Virginia, both states announced partnerships between their departments of agriculture and the Homegrown By Heroes label.

With these latest announcements FVC will have a total of nine state chapters—Indiana, Kansas, Michigan, New York, Texas, Vermont, Virginia, Washington and West Virginia—and 20 state partnerships with the Homegrown By Heroes label.

“We are really excited about these chapters. There is so much work that can be done well on a more local level, and they will allow a lot more veterans to get directly involved in more FVC activities,” said FVC Director Michael O’Gorman. “We will hold the chapters to these nine, at least for a while, and give ourselves some time to learn how best to help them serve the veterans in their local area.”

Retired Army veteran John Fant will lead the FVC of Virginia chapter and brings a wealth of experience to the coalition. After a 27-year career in the Army in which he rose to the rank of colonel, John returned home to his family’s farm in 2013, Summerfield Heritage Farm in Independence, Virginia, where he runs a grass-fed and grass-finished cattle operation.

The Virginia chapter and Homegrown By Heroes state partnership were announced July 26 at an event held at Virginia State University’s Randolph Farm. Virginia Governor Terry McAuliffe, Secretary of Agriculture Basil Gooden and Department of Agriculture and Consumer Services Commissioner Sandy Adams were present at the event, highlighting the importance of the partnership for the state’s agricultural and veteran communities.

“Our military veterans have selflessly served the Commonwealth and our nation, and providing them with a way to differentiate their agricultural products in the marketplace makes good business sense,” Governor McAuliffe said to attendees. “By offering these heroes new resources to develop and market their farm businesses, we will ensure economic opportunities for them to support their families and stay in the Commonwealth, while contributing to this $70 billion local industry.

A few weeks later on August 14, the New York chapter held its inaugural meeting at the offices of New York Farm Bureau in Albany. The New York chapter is also led by a retired Army colonel, John Lemondes, who after a nearly 28-year career in the Army started Elly’s Acres Farm in Jamestown, New York, where he breeds sheep and produces maple syrup and honey. The chapter also includes leaders from NY Farm Bureau, Farm Credit East, NY Department of Agriculture and Markets, and Cornell University. A public launch will take place November 29 with more details to be announced soon.

“We know with this brand our veterans can sell their product in any market within the United States. This agreement gives West Virginia vets a competitive edge they did not have before,” said Leonhard. “Our mission has always been to help open new markets to our producers, especially our veterans.”

Stay tuned for more details about the upcoming launch of the Texas, Washington and Indiana state chapters as well as future partnerships between the Homegrown By Heroes label and state departments of agriculture.