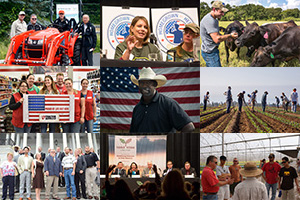 Ten years ago today, Farmer Veteran Coalition incorporated as a project of Community Partners, our fiscal sponsor. A few days earlier we had set up shop in our $250/month office – a book storage room in downtown Davis, California with two desks, a phone number and an address. We had a big idea and we were ready to get busy.

It is hard to imagine how new the concept was – mobilizing veterans to feed America. But we already had found about 15 veterans who were eager to become farmers. Our plan was simple: find a way to help them, and then tell their story.

The story was simple and told best with a picture. A young man or woman joined the Army, Navy, Marines, Air Force or Coast Guard after 9/11 (most of them), deployed to Iraq or Afghanistan (many of them), and here they are with their pigs or chickens or tomatoes. It was a story of courage and resilience, transformation and optimism. It was a story for our time.

A lot has happened in these last 10 years and we at FVC are proud to have been at the forefront of this important movement all along. You can see a timeline of our accomplishments here. But, after all these years, it is still finding a way to help an individual veteran transition to a farmer that motivates us.

Just last week we had the opportunity to help Alejandro who lives barely 10 miles from our office. ‘Alex’ grew up working in the fields; his mother still runs harvest crews. After 9/11, Alex joined the Army and deployed four times to Iraq and Afghanistan.

On his fourth deployment, Alex lost both legs to an IED, but it does not slow him down at all. He now has 435 bee hives with his pollination company, Fury Bees. We were able to buy Alex a Hummerbee forklift to safely move his bees. The forklift cost more than we could spend on one veteran, so we got two other great groups – Work Vessels for Veterans and Semper Fi Fund – to pitch in. We each paid equal parts and Alex got a great piece of equipment just in time for almond bloom.

FVC will be celebrating our 10th anniversary with an Open House at our Davis office on April 2. Alex will be there to tell his story, as will a number of other veterans. If you are anywhere near we’d be honored to have you join us. And if not, we hope you keep following us as we move forward into our second decade, no less excited than when we started.

See more of our supporters.