Mark and Denise Beyers are high school sweethearts who met in 1996. They both joined the Marine Corps in 1998. In 2005, their unit was activated to go to Iraq. 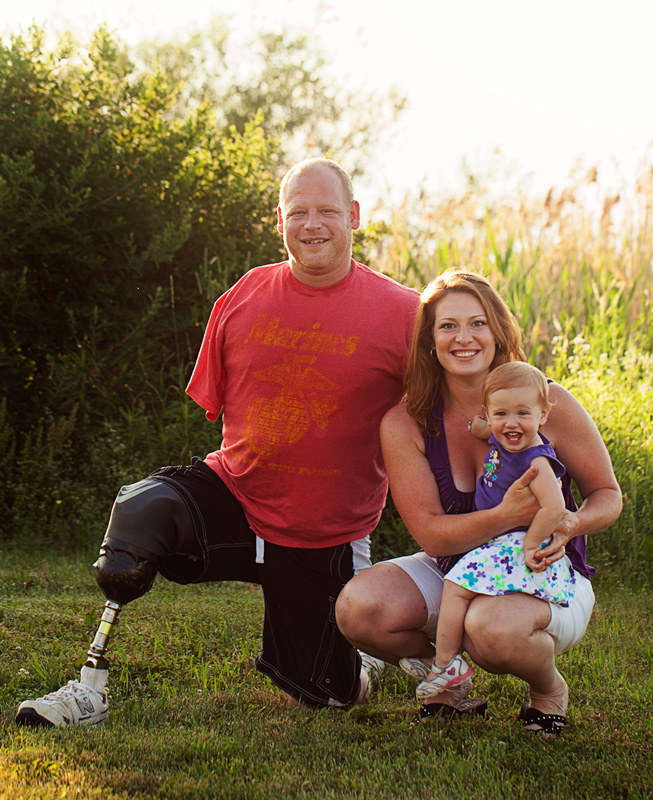 Denise stayed back in Buffalo with the Peacetime/Wartime Support Team while the rest of the company went overseas. On August 26, 2005, while on foot patrol, Mark was severely injured by an Improvised Explosive Device, losing his right arm and right leg below the knee. After life-saving care on the battlefield and in theater hospitals, Mark was stable enough to be transported to the National Naval Medical Center in Bethesda, MD where Denise awaited him as he awoke from a medically-induced coma for the first time. After a month in Bethesda and many surgeries later, Mark was transferred to Walter Reed Army Medical Center to be fitted for prosthetics and for physical and occupational rehabilitation. It wasn’t until a year later that Mark and Denise were able to return to their lives back in Buffalo, NY.

Once home, the couple found a house they fell in love with; a one story handicapped accessible ranch on 15 acres in beautiful hills in the country. In this home, they found happiness in gardening, farming and a self-sufficient lifestyle. In 2009, while Mark was deer hunting on their property, he noticed they owned many maple trees. That Spring they tapped some trees, collected the sap and made maple syrup, and thoroughly enjoyed the experience. A few years later they started Beyers Maple Farm (www.beyersmaplefarm.com).

The Beyers also grow a full garden of vegetables each year. They have free range chickens that provide fresh eggs daily and raise meat chickens during the summer.

The Beyers family have been FVC members since 2011 and shortly after Mark became one of our first Bob Woodruff Farming Fellows. We’re proud to have Mark and Denise as our first Homegrown by Heroes national producers. It is our hope that they inspire the greater HBH community as they have all of us at FVC.