Sugar season in Eastern Kentucky starts in early January, ends in late February to early March, and of course is dependent on the weather. And yet in spite of this 2021 year just started, it’s already the best sugar season Woody Hartlove has ever had.

Hartlove Farms finds its dot on the map in Harlan County, Kentucky on the south side of Pine Mountain, a couple dozen miles from the Virginia border. Established in 2016, Hartlove Farms grew from a hobby garden into a market garden, starting out on a small plot of only 1,500 square feet. Navy veteran Woody Hartlove is at the helm. He thanks his military training for allowing him to adapt and overcome the many challenges he has faced on the farm thus far.

Serving his country from 1983 to 1992, Woody was in Desert Storm. As an Engineman, he served aboard the USS LaMoure County and USS Petrel and at SIMA Little Creek. His primary job on both ships was maintaining and operating the engines and other main propulsion equipment. “I worked down in the engine rooms and maintained and repaired the diesel engines and associated equipment that made the ships go. In other words, I put the ‘GO’ in ‘GO NAVY!’”.

Woody ultimately transitioned into agriculture. He started off growing a handful of vegetables and applied bio-intensive growing practices, which “is a fancy wording for growing a bunch of stuff in a small area” as he puts it.

In 2016, knowing he would need someplace to sell what he was growing, Woody helped form the Harlan County Farmers Market. It launched the following year. As his business has grown, so has his land and crops – he’s added blueberries, asparagus and rhubarb to the mix, and in 2021 he plans on blackberries, gooseberries and elderberries.

As for the maple syrup component, that started in 2017 when he tapped his first tree after marking a dozen trees while out squirrel hunting.

The early days were far from glitz and glamor. Using gallon water jugs hung from trees, it wasn’t until 2020 that Woody was able to install tubing thanks to the CAIP Program.

Now he’s up to 46 taps and 3 main lines running down the mountain to the back of his house. The incline of his property creates a natural vacuum. That incline is in large part the reason his sap collection has increased exponentially, likely even tripled. “I collected more sap in the first run this year, than I have in any full season.”

This season has delivered perfect temperatures for sugar making. The veteran has expanded his variety, tapping a black walnut tree and a boxelder. His plan is to get enough to be able to make a maple-walnut blend syrup, and expand to making walnut syrup in the coming years.

“There is a lot involved in that, access to land and trees, transportation to collect the sap and larger equipment to handle the volume,” Woody reveals. “I am a very small producer compared to most and don’t have any of the fancy equipment like some. My evaporator is homemade using cinder blocks and bricks, I use an old turkey fryer burner and propane as a heat source and two food service pans to boil the sap down.”

Next year he hopes to purchase a small RO and expand his evaporator to accommodate the increase in sap production.

“There’s a lot of work involved with making maple syrup, but that end product makes it worthwhile and the folks here really love having local maple syrup.” 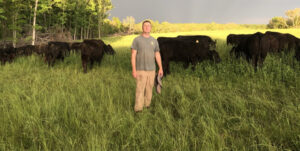 “We are deeply grateful to Tractor Supply Co 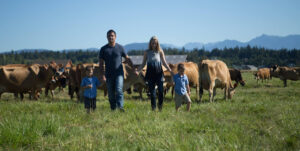 Sarah loves the cows, and I enjoy taking 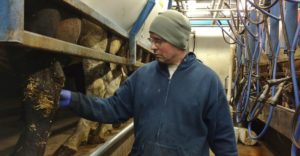 “With each bottle and jar, we are working