“Civitas Organics is how I choose to continue service, organically and unconventionally.” 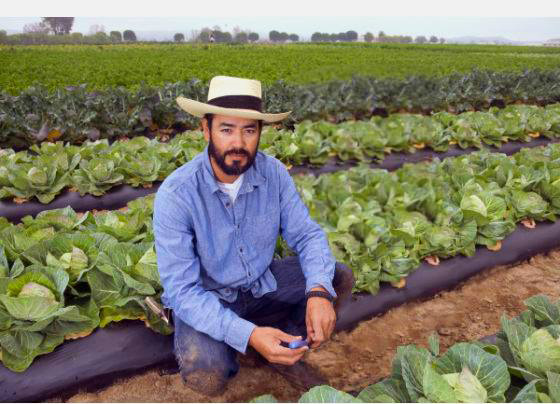 While serving in Iraq, Edgar Hercila helped local villagers with farming by bringing in supplies like wheat and barley, as well as working on irrigation efficiency and greenhouse implementation. His work contributed to the formation of the first ever Agriculture Committee in Southern Iraq, bringing together farmers, sheep herders, veterinarians, and local officials. Edgar still serves as a member of the Army Reserves.

Upon returning home to California, Edgar joined the Veteran’s Agricultural Learning – Opportunities and Resources (VALOR) program. He was given 3.5 acres to work, which he says is his “motivation for putting on boots in the morning”. Also in the VALOR program is farmer veteran Maria Ozvatic. Edgar has attended many FVC workshops and is a member of the Homegrown by Heroes program.

Agriculture was a part of Edgar’s life here in the U.S., long before deploying to Iraqi farmland. His father was invited to the U.S. as part of the Bracero program in the 1950’s. Edgar’s father worked from Washington to Calexico, harvesting everything from lemons to cotton.

Edgar is deeply rooted in Southern California, both in the land and the community. Urban gardening and farming is his passion. He volunteers with the American Heart Association installing edible schoolyards in Los Angeles that provide nutrition awareness to inner city children.

In 2014, Edgar launched his own urban farm, Civitas Organics, built upon a once fallow parking lot. “Every day after 4 pm, a group of enlistees run in cadence through this neighborhood, conditioning before they ship to basic training. I feel having my farm there is an important reminder that service comes in many shapes and forms.”

With the generous contributions of Newman’s Own Foundation, FVC awarded Edgar a Fellowship in spring 2015. This award has enabled Edgar to purchase a cooling and ventilation system for his greenhouse.