Deep in the forest covered hills of southern West Virginia, where the Big Coal River traverses through the heart of Appalachia, times are tough.

While the region, once driven by a thriving coal mining industry, is reeling from poverty and widespread unemployment, Farmer Veteran Coalition member Joshua Nelson is busy creating solutions to put a little buzz back into the economy.

And after recently being awarded a $3,500 Farmer Veteran Fellowship, Nelson’s business, Patriot Bee Company, is starting to take flight.

Born in Charlotte, North Carolina, and raised between there and southern West Virginia—where his roots run nine generations deep—Nelson comes from a long line of military service. Two of his ancestral grandfathers fought against the British in the Continental Army during the American Revolutionary War, one of which was tasked with guarding British General Charles Cornwallis during his surrender in 1781.

His paternal grandfather, who Nelson looked up to as a hero, was a Marine and influenced his decision to enlist in the Marine Corps Reserve as a combat engineer at the age of 19.

“I never remember a time that I have not wanted to serve my country,” said Nelson, now 29 years old. “Honestly, I am not sure it is something I was able to choose; I think it chose me. I joined the Marine Corps because, in my opinion, they are the world’s best ground war fighters.”

While serving in the Marine Corps Reserve, Nelson earned a degree in aeronautics from Liberty University, and also worked underground in the coal mines to support his family. After five years in the Marines, and many conversations with members of the local Air National Guard unit who worked with him in the coal mines, Nelson completed an inter-service transfer to become a pilot in the West Virginia Air National Guard.

As a first lieutenant with the 130th Airlift Wing based in Charleston, West Virginia, Nelson pilots C130’s for the unit which is slated to deploy to Afghanistan next year.

When he’s not busy defending the country, Nelson is focused on building Patriot Bee Company. Though he has been involved with agriculture his whole life, beekeeping is a relatively new endeavor for Nelson who thinks West Virginia’s unique landscape is well suited for it.

“Agriculture has always been a part of my life,” said Nelson, a current MBA student at the University of Charleston. “I started studying beekeeping while in pilot training. The reason I chose this is because West Virginia has a lot of hillside property. We import over $8 billion in agriculture from other states. I knew whatever we did to try and increase Ag GDP in our state had to be able to be done on a hillside. The bees do not mind flying to the side of a mountain.”

In April, Nelson was awarded a Farmer Veteran Fellowship through the generous support of Prairie Grove Farms. The award made a huge impact on his operation, allowing him to quadruple his number of hives and cover most of the cost of 15, 4-gallon hive-top commercial feeders.

“Farmer Veteran Coalition set our operations forward by well over a year by increasing our hive count up to 20 hives,” Nelson said. “This year, we are focusing on growing the number of bees to be split to 40 (hives) next year.”

In the next couple years, Nelson plans to increase Patriot Bee Company’s hive count to more than 100, while focusing on pollination and bee products. He also wants to expand his operation into manufacturing equipment with the goal of creating a robust business that will allow him to hire more veterans.

For veterans considering a career in agriculture, Nelson offers the following advice:

“The best advice I would like to give to any vet considering getting into agriculture or beekeeping is to do it, but make sure you join a support group of seasoned persons who have been there and done that,” he said. “It is much better to learn from someone else’s mistakes.” 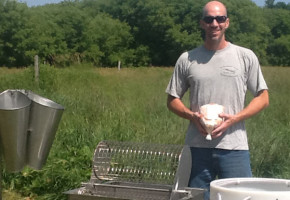