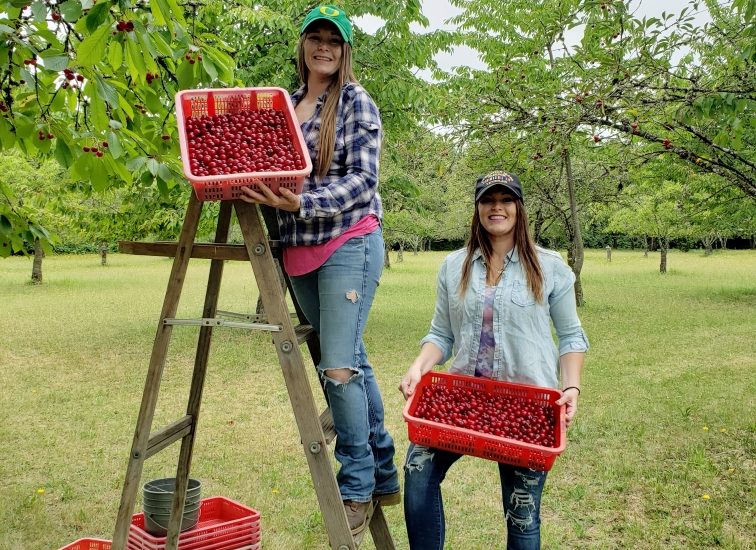 In the Pacific Northwest farming community of Junction City, Oregon lies a historic farm that years ago was left abandoned.  Its name – Hollyaire.  A 110-acre property planted to sour cherries, blackberries, and holly, it was owned and operated by Vaughn and Mary Ball as their second home after retirement.  Mary felt the most rooted and experienced the best memories of her life on this property.  The holly, used for Christmas wreaths and holiday décor, was mailed around the globe.  After 50 years of marriage, Vaughn passed away, at which point the farm was split up and sold.  And left without care.  Two decades later, a young pair of identical twin sisters stepped in…

Ladonna Avakian and Heather Paterson grew up in Oregon, went to college locally, and decided they wanted to do something greater.  With a desire to serve in the military, and a history of uncles and great uncles who also served, it only felt natural.  So they looked up recruiters and went to the Air Force office together.

Ladonna spent four years as a dental technician in the Air Force.  A self-described tomboy, she studied Environmental Science in college.  Heather served in Japan and in the Iraqi Conflict as an Emergency Manager.  Both women returned home with service related injuries.

At that time Heather went into finance, applying her Masters in Business and Finance to a position with the city of Eugene.  Ladonna’s path led her to the abandoned Hollyaire property when her husband purchased the land.  But his day job didn’t allow him to commit to farming.  So Ladonna took it on.

She was attracted to the rich history of the story.  And drawn to the 50 year old holly trees.  She revived all the crops, turning it into a completely working farm starting with 15 acres.  It was a very labor intensive job that took many years to tackle.

Bringing back a distinguished piece of agricultural history, this 15 acres is now known once again as Hollyaire.  Ladonna kept the name intact because she thought it was beautiful.  And then she brought Heather on board.

“I had held summer jobs with livestock.  I always had a passion for being outside and doing something active,” shared Heather, who deals with multi-symptom illnesses related to serving in Iraq.  “So when Ladonna called it was an easy decision.”  Ambitious and driven, Heather wanted something different than the desk chair of the finance world in which she had planted herself.

But funding the property has been a continual challenge, and turning a profit even harder, as they are continually reinvesting income into new capital equipment.

That’s where Farmer Veteran Coalition has helped.  A Fellowship Fund awardee this year, the sisters are getting an orchard air sprayer with their grant.  The equipment will allow them to have more control and spray more frequently, and it will save them thousands of dollars.

“It’s giving up a high paying job and a paycheck [at my job at the city] to come do something you love, and small grants like this one make you feel valued and supported,” expressed Heather graciously. “As veterans we don’t feel deserving and we like to serve.  So when we are served it’s humbling and an honor – just knowing support is out there and that the farming community has your back”.

Ladonna piped in: “Farming is all about community and FVC really is its own community. Anything we need, our neighbors are right there to help us with equipment for sale and with advice.  But then on a national level FVC comes in.  We’re thankful, we’re definitely thankful.”

The pride they felt in serving their country parallels their desire to provide good, fresh, seasonal food for their local community.  With a passion for environmental stewardship, the twins are conscious of how they care for the land and what they put in their bodies.  If they wouldn’t feed it to their kids, they wouldn’t feed it to their community.

Now they are carrying on the farm’s tradition, primarily producing sour cherries and holly wreaths once again. “Holly is a true labor of love” chuckled Heather, as it is not an easy thing from which to make a wreath.  And as one of the only sour cherry farms left in their county and almost in the entire state – many other properties removed cherries in favor of other crops – this has meant a lot of independent learning, some community outreach, and a lot of trial by error.  Though there is one key person still on the farm who helped plant the original cherry orchard as a teenager.  Eric, Ladonna’s right hand man, has lived and worked on Hollyaire for 37 years since he was only 15, first working for Mr. and Mrs. Ball.  Now he has been crucial in teaching necessary skills like tractor and equipment maintenance and wreath making to the twins, and he helps with spraying and more.

The women harvest hazelnuts as a tertiary crop and are soon to acquire another 40 acres.  This year they took their farm to the next level, producing nearly everything under the sun and selling it through their farm stand – tomatoes, cucumbers, eggplant, potatoes, onions, blueberries, raspberries, apples, pears, fig, plums, kiwi, walnuts, olives, basil herbs, and eggs, all sold under the Homegrown by Heroes label.  They make jams and kettle corn too.  Highly addictive kettle corn.  Next year they will add peach trees and nectarines.  Ladonna shares dreams of planting corn and pumpkins so they can host a pumpkin patch as a fall destination for kids.

As if that wasn’t enough, their hobbies include sewing and photography, and they raise four kids between the two of them.  When asked what they don’t do, Ladonna paused a moment, then answered:  “…sleep!”

For the pair, it’s all worth it. “To be two young women and twin sisters doing this when less than 1% of the population of the nation farms anymore and ours is a legitimate farm and business that we’re growing, it’s all very rewarding,” Heather reveals.

Then Ladonna gets to the heart of it all. “Sometimes just sitting on my 1988 Kubota, mowing the grass, that feeling – I couldn’t put it into words, I wish I could just give it to you.  You cannot get that feeling anywhere else.  I have this old blue pick-up and we put 1,000 pounds of cherries in the back and I drive it down to the local farm we sell to and…it’s just…you just can’t replace that feeling.”
Heather: “It’s the lifestyle, the environment, something so natural about it that I think we’ve lost in society.  You are so connected to the earth, it’s nice.”

But perhaps the most compelling is their description of what it’s like farming as sisters.

Heather: “Actually we balance each other really well.  With Ladonna’s background in environmental science, she has taught me so much about farming specifically cherries and holly…even though I’m 19 minutes older!”
“I talk to her about finances.”  This is helpful to Ladonna when the traumatic brain injury she suffered can be prohibitive at times.
“We love it, and our community takes us very seriously.  I have to say though it is funny being an identical twin – because when we do drop offs at farms people don’t know who is who, and they just guess.”

Ladonna expands on that thought: “I’m really a farmer at heart, I’m kind of a tomboy and so I’ll stand and talk to them about spray plans, pruning, working on my tractor.  And it’s completely different if Heather goes in there –because she can help them with finance, grant write-ups.
Heather: “And I farm, I’m out there with the cherries and I prune and do the wreaths and the holly, but I don’t have the degree in it and I’m not actively fixing tractors.  So I just have to tell them –I don’t know that stuff, I’m not Ladonna!”

Their food does more than just nourish their community.  They hire high school kids who are in athletics to help work on the farm as a way for them to raise funds to compete in their big tournaments.  A high school wrestler herself, Ladonna feels compelled to mentor the students on farming techniques, and she simultaneously promotes future careers in the military.

As they reflect on some of the most rewarding parts of farming, they not only complete each other’s sentences, but also the other’s thoughts.

Ladonna: “Absolutely being a mother and farming is one of the most rewarding things.  On everything, whenever I explain the farm, I always picture in my mind a baby in a pack on my back, or out in a playpen in the field…”
Heather: “All our boys out there running…”
Ladonna: “From being toddlers in their mud boots, following us to cut holly when it’s 40 degrees out with their big fluff coats.  They get on ladders and pick cherries.”
Heather: “They even climb up in the trees to pick with us, it’s awesome.”
Ladonna: “My two boys will go grab a tray and fill it up with cherries. They are out there throwing them at each other, also picking them, it’s so good to see it.  I’ll hold my daughter on my back and I’ll mix the wreaths and she’ll fall asleep on my back…and it’s just so empowering.  We’re showing them this beautiful life, we’re doing it with them.”

And the other most rewarding part of farming?

Heather: “Getting to work with my twin sister.”
“It’s the most rewarding.  To be physically active, outside, working with my twin, and having our kids out there, having our family out there – it’s really an American dream.”
Ladonna doesn’t miss a beat: “Nothing can beat it.” 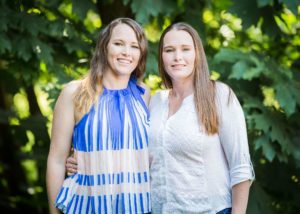 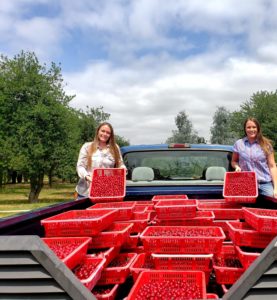 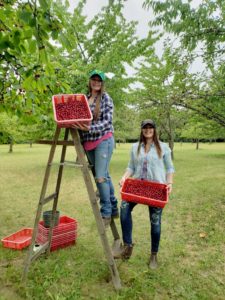 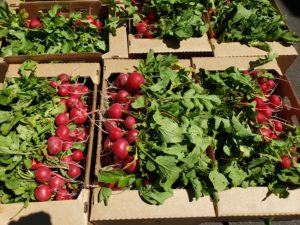 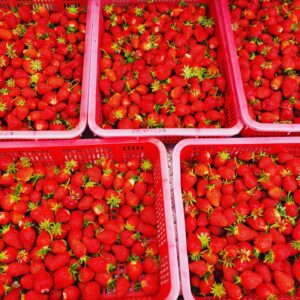 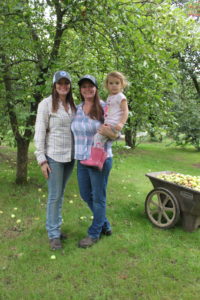 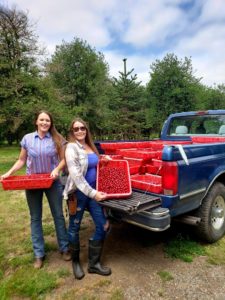 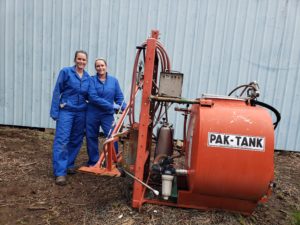 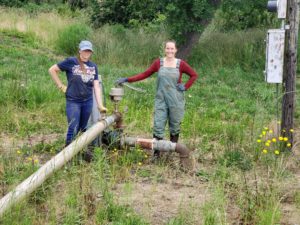 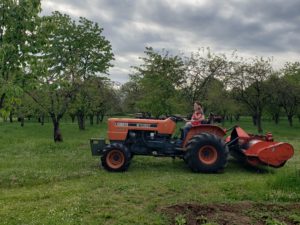 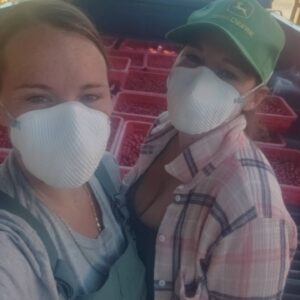 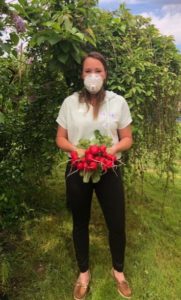 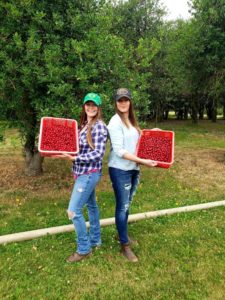 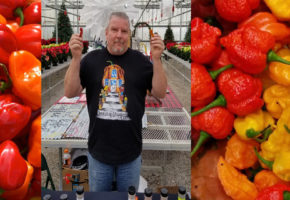