Lorne Williams served as a rifleman in the Marine Corps for 4 years and went on multiple deployments including Beirut Lebanon after the bombing in October 1983.

For the last five years he’s been keeping bees, averaged 20 -25 colonies for the last three.

“Beekeeping has given me the opportunity to start a profitable farm in in Charles County, Maryland.  My wife and I established Victory Chapel Family Farms 7 years ago.  I have a sense of pride in helping bees with all the perils they face now.”

Now his Victory Chapel honey is Homegrown By Heroes certified.

Lorne believes the HBH label helps increase sales with what he considers a renewed sense of gratitude to veterans. When people see his Homegrown by Heroes signage, often he hears a ‘Thank you for your service’ along with a purchase from them. “This gratitude resonates deeply with me and reinforces the sense of honor I felt as a serviceman who contributed to maintaining freedom and the American way of life.”

Victory Chapel honey is produced sustainably and locally in the Washington Metro area from local multi-floral nectar sources. They sell raw honey that is extracted from the honeycomb without heat or filtration, and packaged immediately, thus capturing all the flavor and aroma of honey. 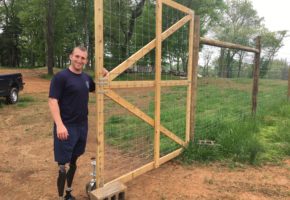