Randy Ryan was brought up in very different environments, from inner-city Chicago to rural Tennessee. Through this diverse upbringing, Randy has developed a vast array of experience to draw upon. Randy is an actor, playing roles in TV shows and movies such as Sex & The City and Public Enemies. 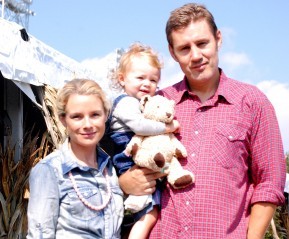 Randy is also an activist and is very involved in philanthropy. He said, “The amazing power and responsibility that comes with a successful entertainment career can be used in many ways, mine will be used to fight childhood obesity and to continue in service to my country.”

Randy served in the US Army’s XVIII Airborne Corps, through which he connected with philanthropist Kelly Meyer, a board member for FVC, the California Endowment, and the American Heart Association. With these connections, he set out to fulfill his dream of helping the most at-risk children build up their confidence by simply growing their own food and eating smart. That was how Northpoint Child and Family Guidance Center in Northridge, CA was created in the fall of 2012.

Northpoint helps students ages six to eighteen who have severe emotional and/or behavioral issues and who cannot overcome these problems in traditional schools. They host a broad selection of lesson plans and goals tailored to the students. They had their first harvest day on December 14, 2012. One belief that Randy holds to is that, “as an actor I’ve learned that pictures tell stories better than words. As a gardener I’ve learned to judge not by a harvest, but by the seeds I sow every day.” Randy’s service to his fellow Americans, through both his military service and his philanthropy, has made an enormous impact in the upbringing of future generations.