Sonia served in the Army and the National Guard as a Petroleum Supply Specialist. One month shy of completing her 8 years, she was deployed to Afghanistan in 2003. She served at Bagram Air Field where she guarded the gates and worked on Refuel On The Move operations fueling combat aircraft. After Bagram she was sent to Forward Operating Bases near Gardez and Kabul. 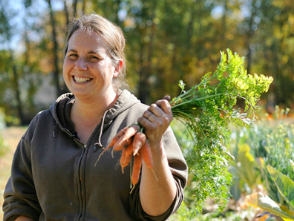 In 2011 Sonia founded Feed Iowa First, a non-profit with the mission of feeding the hungry in Cedar Rapids, Iowa. She began by growing vegetables on donated church property supplying food banks and homeless shelters with fresh produce. In 2013 she expanded the operation to include a network of gardens and volunteers including plots at Rockwell Collins, GE Capital and 3 more churches. All of the food grown on these plots goes to Horizons Meals on Wheels