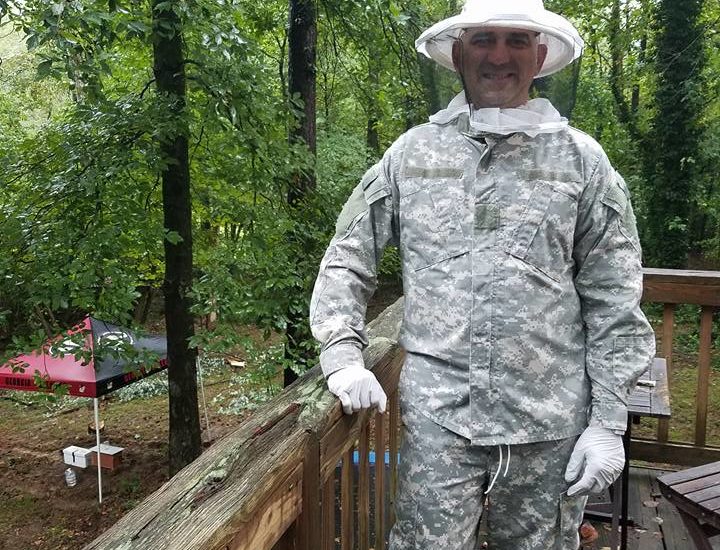 Tim Doherty deployed to Afghanistan in April 2015 – April 2016 as the Deputy Surgeon for NATO Special Operation Component Command – Afghanistan.  During that deployment he tore his bicep and rotator cuff.  Once he redeployed, Tim awaited surgery at Ft. Stewart in the Warrior Transition Battalion.

It was during that waiting that he became interested in keeping bees. Beekeeping gave Tim a new purpose, direction and focus.

He then went to GBA conference, UGA Beekeeping Institute and purchased his very first bee hive.

In January 2017, he founded Doc’s Healing Hives and began to introduce and train other veterans how to keep bees.  “This farm will be a place for me to heal and to help others heal.  My goals are different than most, I simply want other veterans to feel the hope and the joy that beekeeping bring me.”

Doc’s works to provide an opportunity to veterans who are struggling with physical and mental challenges associated with service and deployments in order to help them heal and reintegrate. “I am a relentless worker, planner and driven by saving others, even if it is saving them from themselves.”

Doc’s has since partnered with Veteran’s Healing Farms and have trained 54 veterans, giving each veteran that attends the course everything they need to keep honeybees.

In February 2019, Tim purchased 13 acres in Morganton, Georgia and established Doc’s Healing Hives apiary.  Currently there are 25 hives in the apiary.

The best news of all – just this month FVC awarded Tim a Fellowship grant, enabling him to double the number of hives Doc’s has from 25 to 50.  They will be able to raise their own bees to support the veterans that attend the course.

Adding to that excitement is the announcement that AG Georgia Credit has just granted Tim the support financial support to break ground on our learning center.  “This center will ‘bee’ the platform that we will teach other veterans how to keep bees and should be open by April 2021″ shares Tim with great anticipation. “Without FVC’s and AG Credit’s support it would be difficult for us help other veterans.”