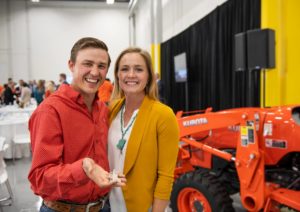 Last month we handed over the keys to a brand new Kubota tractor to Jake Sass!

These ceremonies are always full of high energy and emotion, and this one in particular as it coincided with the Grand Opening of a new Kubota dealership in Kansas City. A Westpoint grad, Jake served three deployments with the Ranger Regiment as platoon leader and reconnaissance section leader. He and his wife Abbey now grow hops for Minnesota craft brew producers. Their Civil Sass Hops hopyard in Chattfield, MN is Homegrown By Heroes certified and they pride themselves on being a place to radically connect a beer community with those who grow it. A very deserving awardee, Jake beamed “I always loved tractors as a kid!”. We can imagine his anticipation in taking a first ride on this brand new orange one of his very own.

Thank you Kubota Tractor Corporation for continuing to make big kid dreams come true with your Geared to Give program. 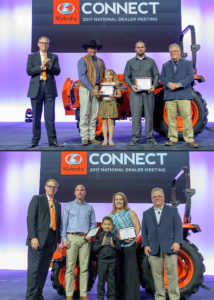 From the main stage of its annual dealer meeting on October 25 in Phoenix, Kubota Tractor Corporation announced four new farmer veteran tractor recipients in its 2017 “Geared to Give” program in partnership with the Farmer Veteran Coalition. During a special ceremony, four recipients, one from each of Kubota’s four operating divisions, were presented with keys to new Kubota L-Series compact tractors in recognition of their years of U.S. military service and for their continued dedication to the country by pursuing futures in food and farming.

END_OF_DOCUMENT_TOKEN_TO_BE_REPLACED 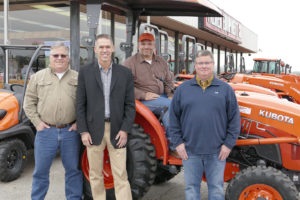 WASHINGTON, Georgia, (December 12, 2016) – Kubota Tractor Corporation today announced that the latest recipient of a donated tractor in its “Geared To Give” program is farmer veteran Chad Tackett, owner of Tackett Family Farms in Lincolnton, Georgia. During a special ceremony, Tackett was presented with the keys to a new Kubota L-Series compact tractor in recognition of his years of service in the U.S. Army and for his dedication to farming. The donation was made by Kubota in partnership with the Farmer Veteran Coalition (FVC), in an effort to provide financial support and donated Kubota equipment to U.S. military veterans pursuing a future in farming.

Tackett and his wife Shirlene, a U.S. Air Force veteran, manage roughly 200 acres of land including planted pines, hardwoods and pastures where they raise grass-fed Texas Longhorn cattle. Tackett grew up feeding cattle and raising hogs on family farms, and with his experience and new Kubota tractor, he plans to develop the farm and expand his cattle operation to sell meat locally by late next year. A father of four, Tackett’s son Zach serves in the U.S. Navy where he is stationed in King’s Bay, Georgia. Tackett served in the U.S. Army for 22 years where he was stationed across the U.S. and overseas before retiring in 2012.